What ever did I do to deserve this?

surgery went well, no screws, just pins....  in a lot of pain....  can't do shit with my hand wrapped up like a baseball attached to my arm...  see the doc on tuesday for follow-up...  still can't wrap my head around my sister's death, doesn't seem real...  nothing seems real

taking it day by day

sorry about this one handed typing

The doctor is going to pin and screw my hand back together..... I am not looking forward to it, to say the least.  Scared shitless...... Wish me luck!

excuse me for trying to type one handed....  spent the last week or so preparing tp travel to Wisconsin for my sisters' funeral, paperwork, (letters from vet/shrink) hoops to jump getting Kona on board as a service dog, not to mention buying new luggage bag that fits new carryon rules, getting approval for kona's meds-- are liquid --- everything lined up with travel agent etc. a cat sitter for Ripley, half packed, ready to go on Monday, and I then I slipped and fell....

didn't think much of it that the time. But a day or so later, my wrist and hand are swelling up...  didn't think much, just put on some ice on it, went to the drug store and bought wrap/brace,  finally today too much to bear, my hand swollen so much that my wedding ring causing that finger to get bluish black, went to clinic today, got x-rayed.... turns out broke my hand's megacarpule-something bone plus splintered fractures in my wrist, doc said. you really did one to yourself.  Put temporary splint on it --- wants me for a follow up in 3 days with an orthopedic doc... might need surgery... which is my sister's funeral service date, asked the doc if I could wait until I return and she said I would be risking serious permanent damage if I waited that long.......... 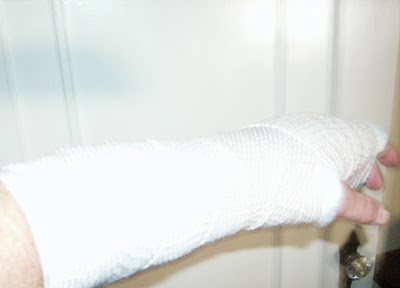 feel so bad emotionally, but it hurts so much and don't want to take the chance of long term permanent damage to my arm, fingers etc, and can't even imagine handling luggage and kona and my arm in this splint...  so have to cancel the trip. hurts to let my family down....... i do feel so bad. physically and emotionally

Was the happiest day of my life. 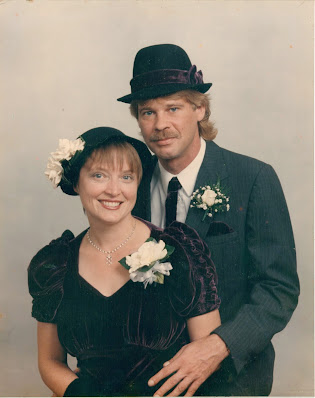 Happy Anniversary to the love of my life, my husband in heaven, Bob.

Today is also a sad day... my sister, Karen, passed away sometime last weekend and found deceased in her bed on Monday...  Still in shock.

I tell you, grief sucks.

And I do hope it's the last one.... seems this house always has something going wrong with it.

Anyway, back in February I noticed my coffee maker was leaking. I got a new, the old the one left a stain which I tried to scrub out without much luck, but figured, what the heck, whose going to be looking under the coffee pot?

Imagine my surprise when I walked into the kitchen about a month ago and saw this: 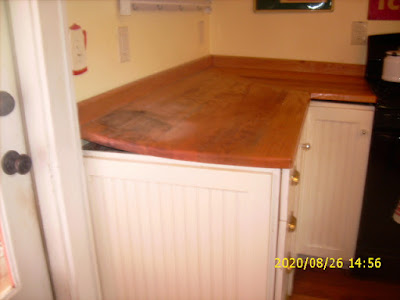 Of course this photo was taken  after I removed everything from wooden countertop. You can see where the buckled portion is lifting up the portion by the stove.
So I got a carpenter over here to take a look and he didn't think a leaky coffee pot could do such damage.... which made me better. But then he wasn't sure if he could fix it.... which made me feel bad.
After all, the kitchen was redone only 5 years ago. The wood for the countertop I was told was recycled from a 100 year old building. 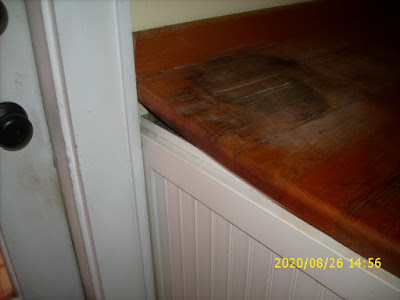 The carpenter wasn't available right away but finally came over last week to look at it again and said he thought he could fix it.  The key word being "thought".
He pulled the countertop off and was surprised that nothing was holding it down. No screws. No glue. It was just sitting there, by gravity I guess. 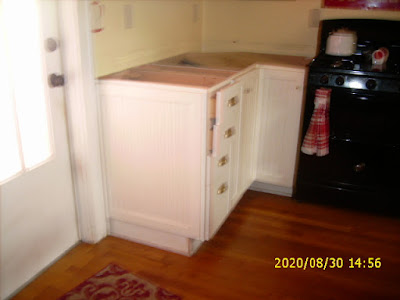 He took some measurements and took the thing to his work shop on Thursday, leaving me living like this all weekend.
Meanwhile, he was going to try to clamp the wooden boards to "unbend" them, then glue them and add supports to keep the boards together. Fingers crossed this would work. And if it did, he'd sand and finish it before bringing back over to my house.
On Monday, he and his worker came back to re-install. The countertop looked great. I couldn't believe it. But when they tried to put it in, it didn't fit! Turns out the contractor who installed the cabinets didn't have the corner properly squared and as the carpenter added support boards, it wasn't fitting. They messed around with it all morning Monday, even going as far as carving a hole in the plaster, but it still didn't work, leaving me with one overnight mess. 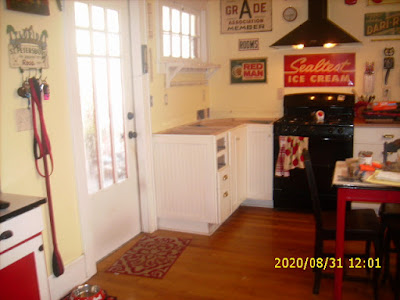 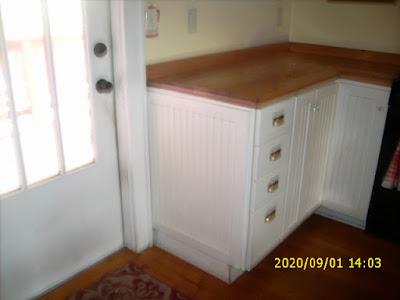 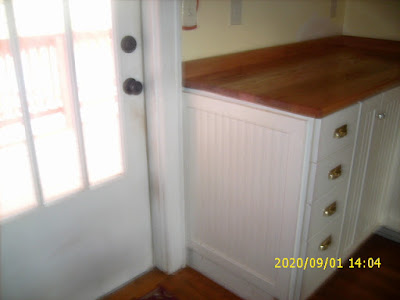 Now I have to wait until it dries as they put a final coat of stain on it after it was installed. I didn't even see them do it, as I fell asleep on the couch while they working.
They had to wake me up when they finished.
After it dries, I'll be touching up the paint in the corner and putting back my stuff, i.e. coffee maker, canisters, spice rack etc... And making sure the coffee pot never leaks onto the wood countertop again, though the carpenter said it was more of a problem with the way the original contractor did the job, as a leaky coffee pot shouldn't have caused that kind of damage....
Well, I will be glad to have my kitchen back very soon!
Posted by Diane at 1:57 PM 3 comments:

Welcome To Our Pink House 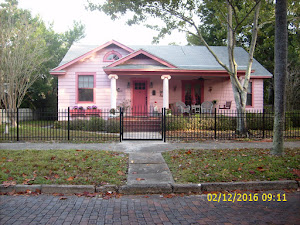 Diane
Bob and I were married 09/16/94. He is my soulmate, the love of my life. Bob is an artist and I am a writer. On 10/20/10, Bob, following his doctor's advice, underwent a carotid endarterectomy. When I left him in ICU that night, he was fine and I thought in good hands. Two hours after my departure, a nurse noted on his chart that Bob's speech was slurred and his right arm was paralyzed. The nurse did not call a doctor. Later that night, the nurse noted that Bob could not move his right arm or leg, still a doctor was not called. The next morning, the nurse noted that he was paralyzed on the right side, a "12" on the Glasgow Coma Scale, disoriented and confused, but no doctor was informed. I arrived at 9:00 a.m. and immediately called for the doctor. He was rushed to surgery. It was 12 hours too late. The CAT scan showed 2/3 of his brain had been damaged. I was told he would not survive. Somehow, he did. Bob was discharged from the hospital on 12/31/10 and, although the hospital wanted him sent to a nursing home, I brought him home instead. This is the story of our journey since that day. This is also a love story. (Bob passed away 5/28/15 and I am trying to survive....)

The Way We Were 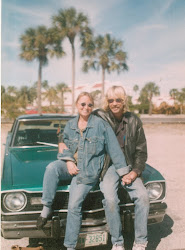 Bob & Me & The Green Machine 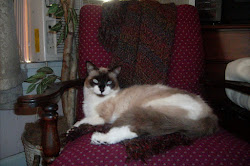 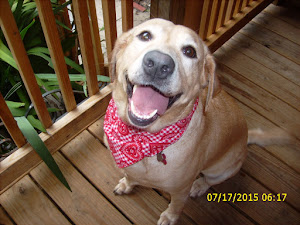